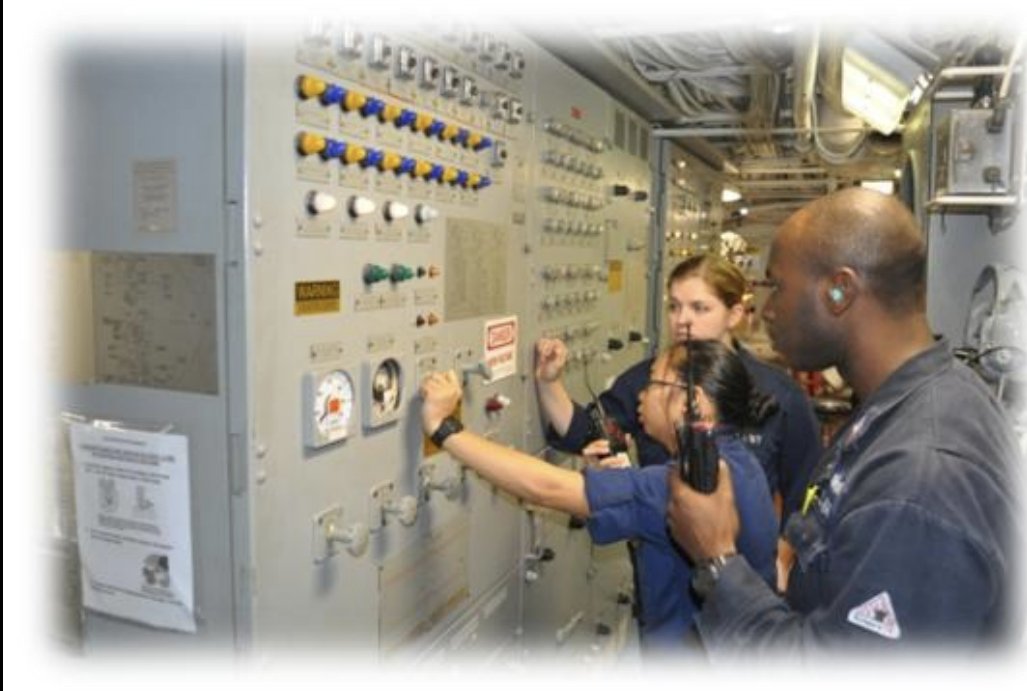 No, not that kind. 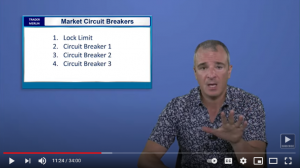 Yeeeeees. That’s the one.

I don’t really talk a whole lot about trading because I’m not super active in it most of the time.

I’ve been following the stock market kind of on and off since middle school.

I have a really hard time learning complex subjects unless I sit in a classroom.

I wrote a post previously about me taking classes at Online Trading Academy just before I got out.

Could I have learned everything they taught me for free on YouTube? Sure. But I’m really bad at being in charge of myself so I chose to go to a physical class that I had to pay for. (Full post here… eventually. ***Apparently I haven’t published it yet.***)

So anyway, there’s been all this excitement surrounding GameStop, AMC Theaters, and whatever else r/wallstreetbets decided to pump up.

Just by sheer dumb luck I bought a fractional share of GME on Robinhood for $10 earlier in January.

Robinhood is where I channel all my impulsivity and poor trading decisions.
My main brokerages are actually TradeStation and Interactive Brokers because I can actually put in bracket orders which is how I was taught to trade at OTA.

But I still can’t help that I’ve been a huge follower of Tim Sykes since my early 20’s and I nerd out on the watchlist that Tim Bohen puts out.
Last April I bought PTON and CHWY on Tim Bohen’s recommendation and they’ve rallied like crazy.

So basically what ha happened was, I saw GME on Bohen’s watchlist a few times so I decided it was a good buy. No analysis or anything, just blindly following internet guru speculation.
It’s the exact thing I’m not supposed to do because I know better, but I also probably have ADHD (test pending) or something.
I threw GME into Robinhood and bought a fractional share at $10 (this is back when it was around $30/share) because my account is super small and that’s all I wanted to risk (Check it out, OTA! I’m applying -some- concepts!)

Well I woke up yesterday morning and saw an alert that GME was up 65%
And I just though “Oh, cool. What a crazy random happenstance.” 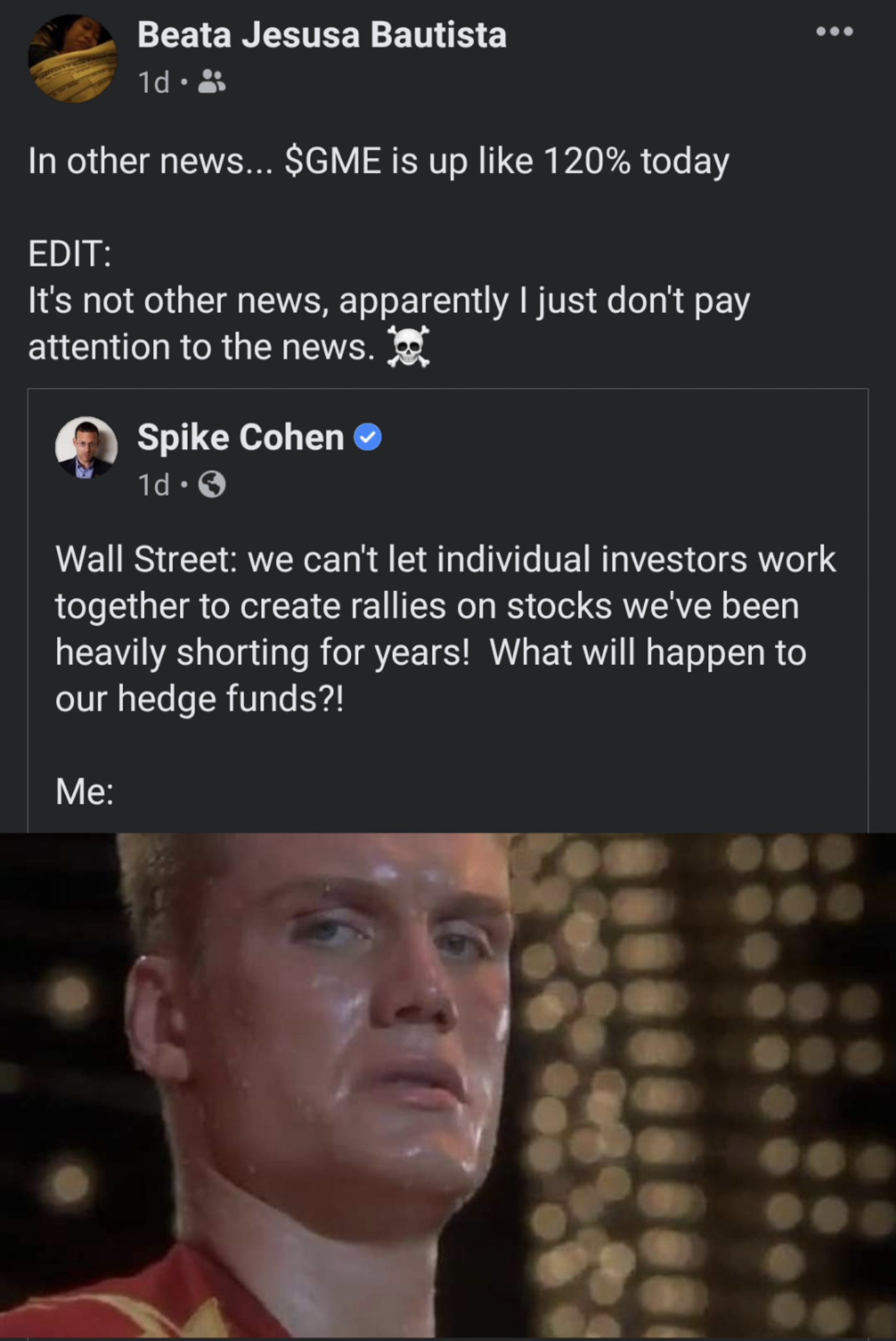 Since I’ve been trying to (and failing at) distancing myself from Facebook, I didn’t actually see the news until a few hours later that Redditors were doing what is basically going to be a pump and dump on GME plus several other stocks.

My initial $10 had turned into $80. I sold $20 worth because… fractional stocks… and recouped twice my initial “investment”. I held onto the rest to see how it would play out.

I didn’t want to stare at charts all day so I tried to put in a stop loss and quickly learned that I couldn’t. 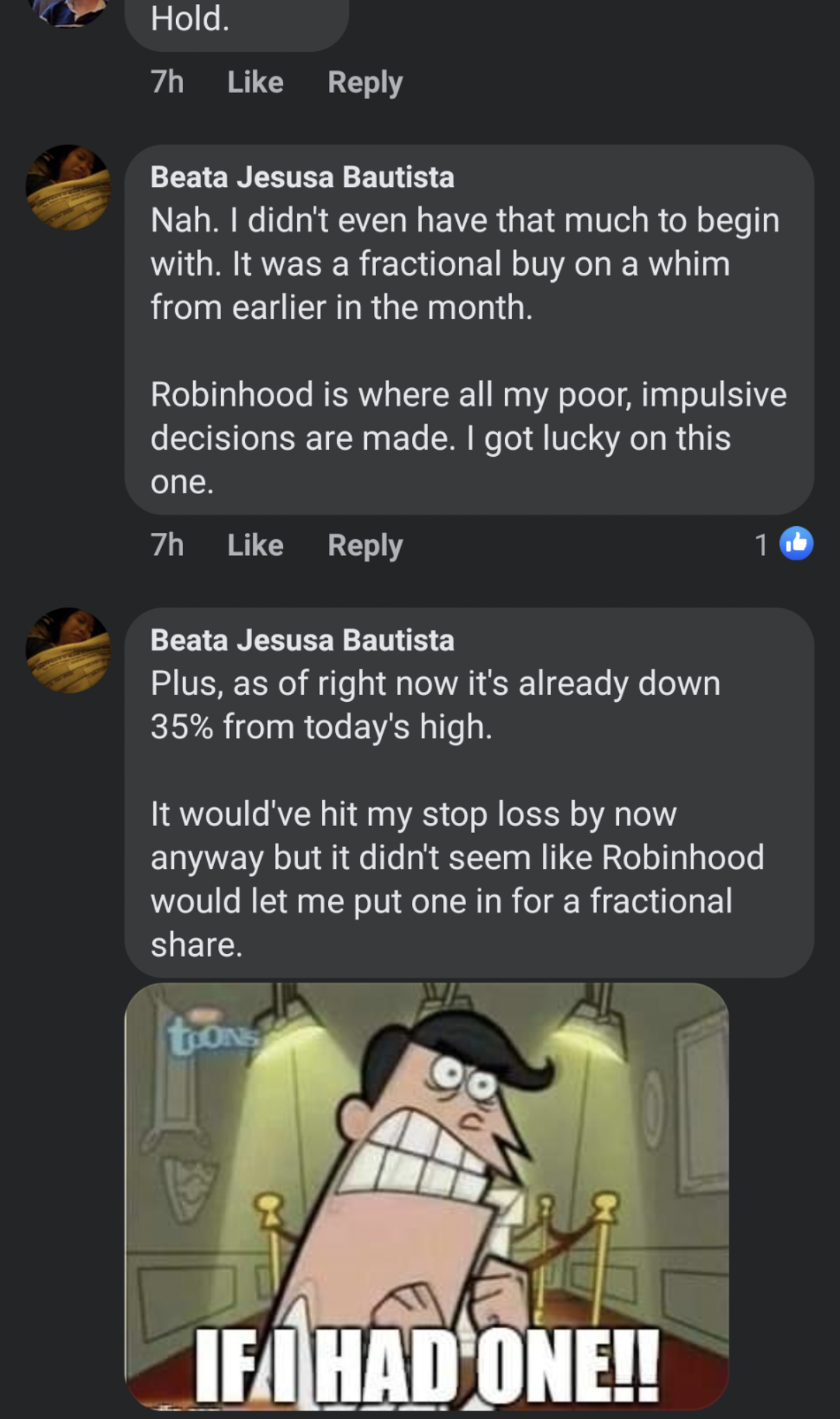 Now that I think about it, I remember that Robinhood’s fractional trading is for market orders only. WHOMP WHOMP.

I set an alert on TradeStation to let me know if the price dips any more than 10% and saw the charts weren’t moving.
I checked Interactive Brokers and got an error that “Market data for GME has been halted.”

I flipped to the news section of IB and saw both GME and AMC was halted on a circuit breaker.

If you remember last March in the early stages of the pandemic, the same thing happened with oil futures last year.
Trader Merlin did an episode on it here:

According to Investopedia:
“A circuit breaker is a kind of regulatory measure that is used to temporarily halt trading on an exchange. Circuit breakers are in place to curb panic-selling. They are used both in broad market indexes, such as the S&P 500, as well as for individual securities. They exist in the United States, as well as in other countries around the world.

Circuit breakers function automatically by stopping trading when prices hit predefined levels. For example, for the S&P 500, a circuit breaker may be triggered after a 7%, 13%, and 20% intraday move.”
(Source: https://www.investopedia.com/terms/c/circuitbreaker.asp )

If any of you Surface Warriors remember from your ESWS training, this sounds a whole lot like load shed.

If this continues for a little bit longer, even more equipment gets shut down.

Circuit breakers are calculated daily based on the closing price of the previous day.
(Source: https://personal.vanguard.com/us/content/Funds/FundsToolsCircuitBreakersJSP.jsp)

Just out of curiosity and because I’m an absolute fucking nerd, I calculated it.

GME’s circuit breakers would be:

As of this writing the trading day is just about done so here’s some screengrabs of today’s charts with the circuit breakers marked.

As you can see, prices fell way WAY below all three of those breakers on each chart pretty early in the day.
So if the breakers are tripped, why the prices continue to fall?

Well, I’m not sure Shipmate, but I’ll find out for you.

But if I had to pull an answer out of my ass I’m guessing
1) Leftover unfilled orders from before they shut it down and,
2) If you can’t buy it, the only option is to sell (or hold) and the price goes down lower and lower. Robinhood showed me early this morning that I couldn’t buy any more GME but I could close out what I had. That’s exactly what you should do because these prices are unsustainable. If you’re in a losing position, suck it up and lose small.

If you look back at the charts, GME has never been worth more than $60 in the whole history of the company. Not only is it overvalued at $347, it’s overvalued at even $100.
Those are Merlin’s words, not mine, but I agree.

I wanted to talk more about load shed but I couldn’t.
You can probably tell that when it comes to military parameters I’m really vague so I say things like “certain amount”.

I Googled the values of Load Shed Stage 1 and Stage 2 to see if that information was publicly distributed. It’s not. (At least it’s not SUPPOSED to be. Thanks Quizlet.)

When I searched for “ESWS load shed” the first official .mil source was down at the bottom of the page.
I clicked on it and was horrified to see my stupid face. 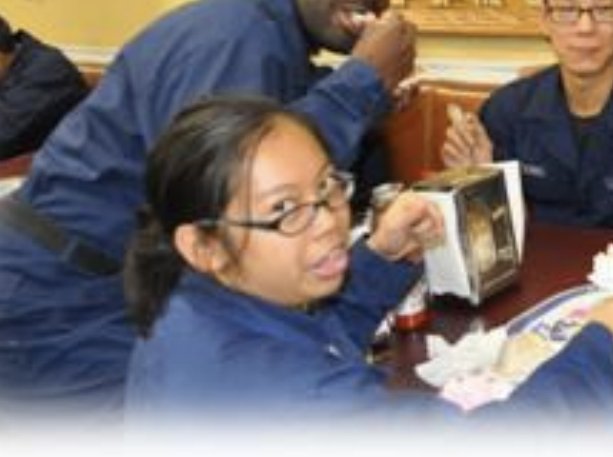 (I’m not gonna block out names or dates because this is all public information.)