I put “started” in quotes because it’s Friday and I still haven’t recorded a single video.

I mean… I recorded one of me changing my car battery but that’s content for another time, I guess.

Since I started this blog three years ago (holy shit!) there was always supposed to be a podcast and/or YouTube component to it.

I think you guys have seen me attempt the podcast a half dozen times before I deleted it all and tried to re-start it with the Navy Spouse Guy.

I signed up for Sean Cannell’s challenge last year too and totally blew it off.

So what’s stopping me?

If you were one of the whole 6 people that listened to my podcast, you know I prefaced it with “I hate my voice and I hate my laugh so buckle up”

As I was stumbling through the wild, weird world of YouTube yesterday I came across one of Mayim Bialik’s videos and went down a rabbit hole.

We have some major similarities but the video that hit me the hardest was the one about social anxiety.

And I realized “If someone with such a severe case of anxiety like her can be successful on YouTube, I can too.”

The exact flavor of anxiety disorder I was diagnosed with as a kid is something called “selective mutism”.

So I searched YouTube and, surprise, there are no selective mute vloggers because, I assume, very few of us will get in front of a camera.

I did find onesie twosie videos here and there which I find really fascinating and I am starting to put them into a playlist.

And that’s prefect because I never like to be the first person to do something. I like being like… second or third. It’s kind of like taking the last french fry in the bag… or a leadership role. I make sure no one wants it more than me.

What is Selective Mutism (SM)?

According to the UK’s National Health Service, selective mutism is defined as “a severe anxiety disorder where a person is unable to speak in certain social situations, such as with classmates at school or to relatives they do not see very often.”
(https://www.nhs.uk/mental-health/conditions/selective-mutism/)

One of the key characteristics is that it’s not a complete inability to speak, we are physically capable of speaking there are just times when we… can’t.

The best I can describe it is, when I was a kid, I wanted to speak so bad but my throat would tense up and I just couldn’t. It wasn’t me just being shy. It was intense. It was paralyzing.

Can you grow out of Selective Mutism?

Almost all of my friends can’t imagine me not being able to speak because now I just don’t shut up.

In my case, I don’t think I fully grew out of it. I sincerely don’t believe it’s possible to.

My perspective is that I either still have it or it evolved into two different, but similar, creatures: Generalized Anxiety Disorder (GAD) and Major Depressive Disorder (MDD)

Of course, a lot of that is due to military life in general.

The whole reason I don’t talk about SM is because it was a pre-existing condition and I ended up getting medically retired for mental health reasons.

It makes me feel like my enlistment was fraudulent.

My whole identity for my entire adult life has been that of a Sailor.

Despite the fact that I served for ten years and I was a First Class Petty Officer, at times being charged with leading or training a department of well over 80 Sailors I still feel like a fraud.

How did someone like you get into the Navy?

Hahahahaha!
If you have to ask me that, you’ve never met a military recruiter. 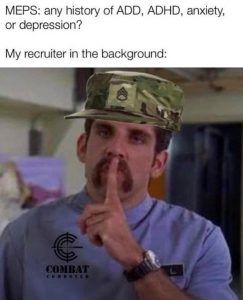 There are waivers for everything and by the time I went to MEPS, I guess I was presenting neurotypical enough to make it through.

I did get sent home from MEPS the first time so I could get my case file from the school psychologist and speech pathologist.

My recruiter was pissed.

Those pages showed that I’d made progression and that I was all better or whatever. Enough that I could enlist.

So yeah, I know logically speaking that my enlistment wasn’t fraudulent. It’s something that I disclosed and the military doctors signed off on.

What’s next? Are you going to be a SM blog now?

My Facebook page devolved into a Navy meme page… which I’m pretty okay with.
The whole idea was that I was going to drive traffic from there to my blog.

As it turns out, the idea of people actually reading my stuff really freaked me the fuck out. 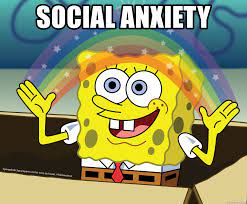 But no, this blog (and now maybe these videos and podcasts?) has always been about three things
1) Military Transitions
2) Parenting
3) Mental Health

Nearly everything I write and talk about in my daily life falls into these three categories. That’s just who I am as a person. I’ve been really big on identifying my personal brand lately and I’d say those are the main ideas.

All in all, selective mutism has played a huge role in my military career and subsequent transition into civilian life. If I can contribute to the SM community under the umbrella of To Go Ashore, then I’m totally here for it.

So here’s the plan moving forward.

Since I’ve been doing better at writing recently I’m going to keep writing blogs, then I’ll use those blogs as a starting point for my YouTube videos, I’m going to rip the audio from those videos to become my podcasts.

I know, that sounds like pretty classic Beata and I’m going to overwhelm myself then end up doing none of those things.

I guess time will tell.